Former OSU standout has influence in role at WVU 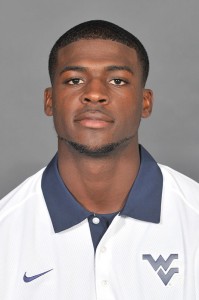 McGee has finished his first season as a defensive graduate assistant at WVU.

MORGANTOWN, W. Va.—The phrase is a common one that is told to every young person, especially when they are in a position of influence: “Remember that people are always watching you, even when you don’t think they are.”

Andrew McGee can attest to this for his own situation. He currently is on the football coaching staff at West Virginia University because of reasons he did not realize.

Many know WVU head coach Dana Holgorsen went to the Mountaineers after being the offensive coordinator at Oklahoma State. McGee was a defensive back at OSU, who rarely spoke to Holgorsen while both were with the Cowboys.

“Andrew is a really good, bright young man,” Holgorsen said. “When I was at Oklahoma State, I watched him, and he is a leader of the FCA (Fellowship of Christian Athletes) guys and is a tremendous kid. He has a bright future and has been working closely with (the football players) since he got here.”

All of what Holgorsen said is true. McGee is a leader with FCA, and it is one of the reasons Holgorsen wanted him at WVU. He wanted his spiritual leadership abilities to have an influence on his players.

“Along with my graduate assistant duties, I assist with the FCA pre-game chapels,” said McGee. “Sometimes I will speak or lead in music. The chapels are not mandatory for players, but we always have about 40 players attend. It is an amazing experience being with these men who desire to sing praises to God.” 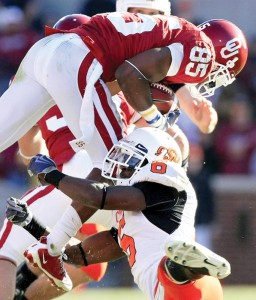 McGee makes a tackle that caused his neck injury. He recovered to become an all-Big 12 performer at OSU.

McGee mentioned Mountaineers quarterback Geno Smith and wide receiver Steadman Bailey were among the many players who faithfully attended chapels. Mostly, McGee appreciated all the players who came, and he considers this opportunity he has as a unique one to speak openly with players about his faith in Jesus Christ.

“I have regular in-depth conversations with these guys about Christ,” he said. “It’s one of the blessings of this ministry I have. It’s not just seeing people on Sunday, but every day. And the players thank me for being here at West Virginia and for giving them support both on and off the field.”

Born in Jackson, Miss., McGee said his parents, Larry and Doris, were his spiritual leaders. He credited the disciplined lifestyle his father instilled in him as part of his understanding of what it means to live the Christian life in such a way that would help him grow into a man of influence.

“God brought the right people into my life,” he said. “When I was in high school, my youth pastor (Rayburn) knew I was called to lead.“

And lead he has done and is doing. Stories have been written about McGee’s improbable journey at OSU. In 2009, he recovered from a broken neck to become an All-Big 12 cornerback a season later, leading the conference with five interceptions.

One of the things McGee credited for his amazing recovery was his faith, saying “it would be an injustice to God if he didn’t make the most of his second opportunity.” 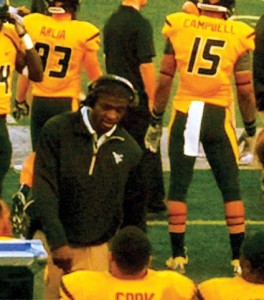 “I thought football was done,” he said during the 2010 season. “But I was just fortunate to have another chance to come back out here, so I just glorify God with it.”

Now, McGee has the chance to use his playing experience and the influence he received from his youth to share with those under his leadership.  Some have the chance to play football professionally.

“They know they are going to have influence on others,” McGee said about his current WVU players. “They know they will have thousands of people watching them every Sunday, so I just hope what encouragement and support I can offer them now will make even more of a difference when they have that chance.”

And so goes the power of influence, even when people are unaware.