We have a strong-willed son.  A son whose first word (and only one for a long time!) was NO, a son whose first impulse is rebellion, a son who doesn’t care one jot about smiling at church members so his mama and daddy can look good, a son who tells it like it is even when it’s brutally honest, a son whose will is made of iron. 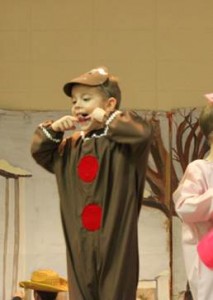 He’s four now. Two years ago we were fighting daily battles with him, hard.  I remember many solitary walks, pacing the church parking lot after Tim got off work, begging God for wisdom, strength, love.  Truly, I was making it day-by-day, trying to maintain consistency and calm discipline.

Something inside me realized we were in a crucial season. We could either give up out of frustration and exhaustion (and some days I wanted to!), or make the hard choice to fight for our son.  We had to remind him daily who was boss. We had to earn the right to be his authority by following through each time he disobeyed.  But we knew we weren’t just fighting for respect and authority as parents. We were fighting for his compliance to all the authority he would encounter in life, including God’s authority.

Slowly, day-by-day, we won the war for his soul.   Eventually, months later, we stopped to reflect and realized that the daily battles were over.  Obedience was expected, and obedience was rendered. Occasionally, we still have a skirmish, but I don’t like to think about where he would be (where we would be!) if we gave up and relinquished control.

We faced another anxious hurdle as we approached preschool. Would our teaching transfer? Would he transfer the concept of authority to others, or would he challenge the teachers continually and force their hand to administer consequences?  I can’t tell you the relief I felt after his first semester of preschool.  He thrived.  He wasn’t perfect, he had grumpy days, and there were a few consequences and some apologies made, but overall he thrived.  He made friends, built robots, and to my great relief, his teachers liked him.

They chose him to play the starring role in their preschool Christmas play, The Gingerbread Man.  Anyone would enjoy watching their preschooler perform, but the event had special significance for me.  Tears welled up as I watched Ben swagger to the microphone and belt out his lines with confidence.  Run run, as fast as you can; you can’t catch me, I’m the gingerbread man! 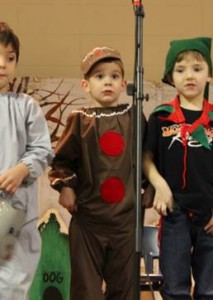 He has embarrassed me, frustrated me, exasperated me, infuriated me, and driven me to my knees more than any of our other three children.

And because of that, I am forever grateful.  Because I belong on my knees anyway.

And because of that, I am so very proud of him, who he is becoming, and the progress he has made.

And because of that, I love him with this crazy love.  The love of one who has chased that squirrely little gingerbread man down the road too many times to count, dragging him back into the arms of grace.

He’ll turn five in two months, and I surprised him the other morning by scooping him up in my arms, wrapping his long wiry legs around me, and holding him close.  I told him I loved him.  He laid his head on my shoulder and exclaimed, “I want to be like Daddy when I grow up . . . because I want to marry you, Mommy!”

To any parent out there in the trenches of disciplining a strong-willed child, press on! Your labor will yield the harvest you desire.

And don’t forget that Grace, once it has chased down and chastised and doled out consequences, always ends with a hug.