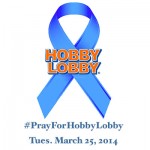 On March 25, millions of Christians around the world are joining in prayer for Hobby Lobby Stores and its founders, the Green Family. Some may find it strange that God’s people are rallying around a for-profit company, but I for one am joining with others in prayer. Many Christians feel an affinity for the Green family, who have generously supported missions and ministry around the world for years

Though most of us who pray are also shoppers at Hobby Lobby, the prayers are really directed toward the preservation of religious liberty in America, our most cherished freedom, as the U.S. Supreme Court hears arguments related to the lawsuit filed by the company in September of 2012.

To be specific, the Oklahoma-based retail company Hobby Lobby is challenging the federal Health and Humans Services (HHS) mandate, which–among other requirements–forces employers to provide employees with free contraception pills.

Throughout the public debate, Hobby Lobby and other faith-based businesses and groups challenging this unjust law, have been a target for so-called reproductive rights groups. Despite what critics may say, Hobby Lobby has a strong case. First, the business owners of Hobby Lobby, a private company, have constitutionally-protected rights to freedom of religion and speech, and the HHS mandate is a direct affront to this. Secondly, how can the HHS mandate proponents expect companies owned by Christians to subsidize drugs like the “Morning-After Pill” that can end pre-born human life?

When originally asked, CEO David Green cited opposition on moral and biblical grounds. He said, “By being required to make a choice between sacrificing our faith or paying millions of dollars in fines, we essentially must choose which poison pill to swallow. We simply cannot abandon our religious beliefs to comply with this mandate.”

Hobby Lobby is one of the few non-Catholic-owned business to file suit. Evangelicals and Catholics, who once again find themselves allied in defense of life and religious liberty, are taking an important stand against the HHS mandate.

This is not the first time the two groups have joined forces in the culture war. On the pro-life front, Catholics and Baptists (Evangelicals) have been largely responsible for the progress made in shifting public opinion toward life, as well as positive public policy making. Each year in Oklahoma, Rose Day offers a chance for people of various faiths to come together to make a statement in support of life.

While there are no shortage of theological differences, both Catholics and Evangelicals, at the very least, believe that Jesus Christ came to give us “life and life more abundantly” (John 10:10). In 1994, Catholic and Evangelical leaders, not without any controversy or criticism, came together to create the ecumenical Evangelicals and Catholics Together statement. Prominent signators of the document, which sought to outline common beliefs about Jesus Christ and social concerns such as abortion, included J.I. Packer and the late Chuck Colson.

Now 20 years later, Evangelicals and Catholics find themselves united again by a common enemy—namely an onerous government regulation and the secular, radical ideas attached to it. While there have been many unjust laws in the history of our country, this one is unique. Whereas many immoral laws enable part of society to do harm (e.g. such as legalized marijuana), this law actually requires the good parts of society (e.g. Christian organizations, companies, universities) to do harm.

This cannot stand. While the gulf between Evangelicals and Catholics may be too wide to bridge, this monumental challenge provides an opportunity for us to stand together in defense of life and the Author of life.

Today, we pray together for a shared goal of religious liberty, and we trust in God to preserve this freedom, as we seek first His Kingdom.