How the Author of Salvation Made an Author Out of Me

I was called to be this, called to do that, called to move there. We hear it all the time. But being “called” is a curious thing, isn’t it? For the longest time, I used to think being called meant fulfilling aspirations in the name of God. Like the “Get Out of Jail Free” card of spiritual decision-making. As in Monopoly, though, there are only a few of these cards out there, reserved for a lucky few.

Until a few years ago, I believed that God only called His followers to one of three things – ministry, missions or medicine. Everything else was a blurry gray scale of confusing decisions and critical crossroads. God doesn’t call people to telemarketing. He doesn’t call them to sports PR, aviation mechanics or any other nine-to-five.

This is what I believed until recently – until Falls Creek. Throughout my five-day stay, the worship band strummed out Hillsong’s “Mighty to Save” night after night. And there was always one line I could never shake, a line that scrolled through my mind like a marquee every night before falling asleep.

Little did I know, that was the first of many nudges God would toss my way over the coming years.  From small group to Sunday school, camp to weekend retreats – the writing references were everywhere. No, really. Everywhere. Of course, I fought it. Doubt, self-fulfillment, misinterpretation, anxiety…whatever I was feeling, it couldn’t be from God. God simply does not call writers. 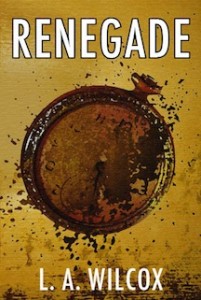 On April 1, 2014, I published my first novel – a science fiction time traveler piece by the name of Renegade. They say late obedience is disobedience, but I disagree.  Although I did not write this book simply because I felt called to do so, I realize now God was laying the groundwork years ago. He was just kind enough to let me look over His shoulder.

“But you wrote the book. You put in the time, effort and money. It’s not as if God Himself came down and whispered the words into your ear,” a skeptic might say. True. But He provided the money, made way for the time and set fire to my pen. It might sound cheesy to say that God called me to be an author, but sometimes the truth is just that. Cheesy.

And even though Renegade is not a religious piece, I’ve learned a lot over the past year about the electric marriage between faith and fiction. More importantly, though, I witnessed the mighty and amazing ways God can move through something small. It’s comforting, thrilling and empowering all at once – inspirational, to say the least.

If you are interested in checking out Renegade for yourself, you can buy it for Kindle at $3.99 here or in paperback for $9.99 here. You can also like the Facebook page and join the conversation on Twitter using #ReadRenegade. Whether it’s by sharing this blog post or posting the Renegade link to Facebook, I would love to have your help sharing my story. Why? Because it brings to light one very important question.

If the Author of Salvation can make an author out of me, what can He do in you?

I'm from Mustang, Oklahoma and am currently a student at the University of Oklahoma studying public relations and writing. I love traveling, knitting, blogging, and 90s boy bands.

I'm from Mustang, Oklahoma and am currently a student at the University of Oklahoma studying public relations and writing. I love traveling, knitting, blogging, and 90s boy bands.