I recently rode on an airplane next to a man who previously attended a Southern Baptist Church but has fallen out of church. I quickly learned the man (who I will call “Bob”) was probably in his 50’s and had become disenfranchised with organized religion and dropped out.

He was not unchurched; he was what I called “de-churched.” What sparked a two-hour conversation with the man was his question about a book I was reading, Jesus Hates Religion. 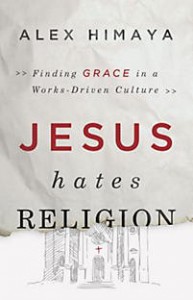 The book, by Oklahoma Pastor Alex Himaya, essentially focuses on the trappings of false, man-made religion and points toward Christ and the Doctrine of Grace, all in a clever, catchy packaging. By explaining the truth contained in the book, it led very easily to a faith-based conversation with the man.

Our conversation ended with Bob saying, “You know, it is probably time I get back into church.” We left it at that. Only the Lord knows if he will follow through on that urge to be part of the Church, but it left me pondering.

How could a book that appears anti-Church—or at least anti-religion—create such a spark? Perhaps that is the genius of Himaya’s book. It attracts attention—for and against it—and helps create conversation opportunities that might not otherwise be there.

The risk in writing a book like this is that many today claim to still love Jesus but hate the Church. We have what author and pastor Kevin DeYoung called a “de-corpulation” problem—meaning cutting off the Head of Christ from the Body of Church.

Early on in the book, Himaya makes it clear, however, that “When I say Jesus hates religion, I do not mean God hates the Church. He loves the Church.” Himaya, who has a very interesting religion background, contrasts the good religion we read about in James 1:27 and the bad, meaning man-made approaches to God.

Whether you are like Bob, out of church but still longing for God’s Hand on your life, or if you are a faithful church attendee, this book would be a good read. If you are anti-Christianity, this book too would challenge some presuppositions you might have.

For a more in-depth look at this book, check out this new podcast with Pastor Alex.