Freedom. Liberty. Salvation.  These are words we use frequently without even thinking.  But there was a time when some preachers here in America were not permitted to say those words. This summer, I visited family in Savannah, Georgia. We had the privilege of taking a tour through the First African Baptist Church of Savannah (www.firstafricanbc.com).  Organized in 1773 and constituted in 1777, this church is officially the oldest black church in North America. The congregation is still active today.

I was fascinated by the history of this body of believers and their church building. The beautiful brick building was built in 1859 by a majority enslaved congregation. One of the jobs assigned to the women was to carry the bricks from the Savannah River up to the church. They carried these bricks in long aprons on an incline up to a half mile in the hot, humid Savannah climate. The slaves were given permission to build the church but only in the dark evening hours after their other work was completed.

We sat in the pews in the balcony which are original to the church and made by slaves.  On the outside of the pews are markings written in the African dialect known as Cursive Hebrew. No one has been able to fully translate the markings.  Looking up. the ceiling is in the design of a Nine Patch Quilt which represented that the church was a safe house for slaves. The Underground Railroad used quilts with codes to signify safe houses, serve as maps, and inform people what to look out for on their travel.

Much of the money collected to purchase the land and construct the church building was donated from the savings that slaves were setting aside to purchase their freedom. 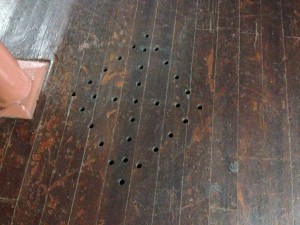 Beneath the lower auditorium floor is another finished subfloor which is known as the Underground Railroad. Holes in the floor are in the shape of an Africa prayer symbol. It is a diamond with a cross in the middle. This symbol doubled as air holes for escaped slaves who were hiding under the floor. They would make their way to the tunnel system below the church to head north.

On this trip, I was impacted by the sacrifice, dedication and fortitude of these believers. I was also reminded to appreciate my freedoms. We live in a free country. When our pastors preach they are free to use whatever words in the Bible they feel led by God to use. But our nation is becoming increasingly hostile to people of faith. Is our religious freedom slipping away from us? It benefits everyone to preserve religious freedom, not for just Christians but for all people, even those who don’t have a religion. The free expression of ideas is foundational to a healthy, progressive and free society. The preachers of the African Baptist Church were told not to use certain words because the slaves might think certain thoughts; thoughts that might result in action. Erosion of our freedoms should be unacceptable. Our country is changing. What will it take for us to keep the freedom we have?  It will be a lot easier to fight to keep it than to fight to get it back once it is lost.  Step up and speak up. Get involved in the political process of our state and nation. What will you do?  What will it take?