The Southern Baptist Convention’s new International Mission Board President, David Platt, has a new book out that is sure to create conversation.

The book by Platt, the New York Times bestselling author of Radical, is titled Counter Culture. He tries to apply the truth of the Gospel to various hot-button social issues, including sex slavery, racism, immigration, abortion and pornography. 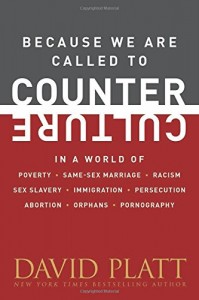 What struck me was at the outset of the book, before tackling these difficult, persistent problems, Platt provides a definition of what he means—or what Evangelical Christians mean—when we say “The Gospel.” It is “The good news that the just and gracious Creator of the universe has looked upon hopelessly sinful men and women and has sent his Son, Jesus Christ, God in the flesh, to bear his wrath against sin on the cross and to show his power over sin in the resurrection, so that everyone who turns from their sin and themselves and trusts in Jesus as Savior and Lord will be reconciled to God forever.”

While his previous books, writings and sermons have wide appeal, the bulk of David Platt fans I know are young adults. Platt was quick to admit that many compassionate, Christian young adults are quick to jump on board when it comes to fighting poverty or human trafficking, but when it comes to the same-sex “marriage” issue or abortion, they do not as likely get involved.

Platt, in this book, confesses that he was too late to the pro-life discussion. Quoting extensively from the Bible, he shows how God got hold of his heart (and his voice) on this epic struggle for life against a culture of death. Platt presents his ideas on these controversial topics, like abortion and homosexuality, with care for the people involved and with conviction. Throughout the book, he has plenty of Bible verses and quotes from influential Christians like C.S. Lewis.

Tragedy and the solution

The stories of human trafficking in Nepal were heart rending. We often hear statistics about sex trafficking, but Platt put a context to it and faces and names to the problem. At the conclusion of each chapter, he offers prayer points and action points for Christians. The book is designed, it appeared, more for laymen in mind, rather that specifically pastors. Nevertheless, Christians (and people who are not Christians) can grapple with the material.

Finally, the book’s thesis is its greatest strength. That only God’s Son provides a transformational difference on any social problem. We do not have a “social gospel” to offer, we have the real Gospel. Only Jesus Christ can give hope to the outcast, the widow, the orphan, the sex slave, the abused, the abased. Only Jesus can lift people out of the slimy pit of sin and life and set us on the solid rock, a foundation that can never be taken or moved. Thanks be to God for Jesus Christ.