Movie Review: ‘Do You Believe?’ 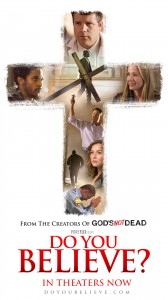 From the creators of the hit Christian movie, “God’s Not Dead” comes a new release, “Do You Believe?”

Starring recognizable actors including Cybill Shepherd, Lee Majors and Sean Astin, the movie follows “A dozen different souls—all moving in different directions, all longing for something more. As their lives unexpectedly intersect, they each are about to discover there is power in the Cross of Christ.”

Many Christian movies today use amateur acting that can be hit and miss. By attracting professionals, “Do You Believe?” steps it up a notch in quality. The only “novice” actor would be Oklahoma’s own Brian Bosworth. “The Boz,” however, does have acting experience and plays a major role in the movie in the form of “Joe,” a rough but redeemed soul, who suffers from a significant ailment.

Without spoiling the plot, there is a wide variety of characters in the movie to which people can readily identify. There is a gang member, a grieved couple, a single mother, a stuck-in-a-rut pastor, a pregnant teenage girl, a post-traumatic war vet and others. By showing a wide array of characters, the movie will appeal to broad audiences.

There are various tense scenes in the movie that keep your attention, and the heart-touching moments have their proper effect, in my unprofessional opinion. While the movie’s budget I am sure does not compare to most (given that it had a limited release), the movie did not appear to be low budget.

As previously mentioned, this movie follows the stories of 12 different people. This was a bit ambitious for a two-hour film, one that hinges on character development. The movie probably could have been done just as well with two to three fewer sub-plots. Aside from that, the movie makers brought it all together by the end and wrapped the plots together nicely.

While critics, and maybe even the average movie aficionado, will be critical or dismissive of the overtly Christian themes, the movie achieves what it set out to do: send a message. That message is the cross is central to life, that there is power in the cross of Christ. Not the mere symbol of the cross but the actual atoning death of Jesus Christ.

We may, the movie tells us, be able to disbelieve or try to discredit the cross, but we cannot ignore it. One scene in particular stands out. As someone contemplates suicide, the sudden appearance in their eye’s view of a cross deters them. It reminded me of the scene in Goethe’s classic book Faust, in which Dr. Faust is about to kill himself, until he hears the church bells ring at Eastertime. Even though Dr. Faust is an unbeliever, he recognizes the deep meaning of Easter until God can later save him from the clutches of the Devil.

Similar to other recent Christian movies, there is talk throughout about the Gospel, even while there is not a specific presentation of the Gospel that you would find in a sermon. Movie goers will walk away, though, thinking about the authenticity of their own beliefs. While “Do You Believe?” will not win an Academy award or be a box-office best-seller, all who see it can take its message to heart.

One response to “Movie Review: ‘Do You Believe?’”