I’m covering a variety of topics in this week’s Doyle’s Half Dozen. Let’s get to them.

The shooting on the campus of an Oregon community college continues to be a hot topic. President Obama is visiting the families of victims on Friday. The topic of gun control is popular among politicians and media members. This is a difficult, sad commentary in our country right now.

My friend Christi Roselle offered an excellent response and explanation in her blog “Clinging to our guns and religion.” I agree with her that ulterior agendas seem to be exploited when horrific events happen. There needs to be more sensible behavior from leadership.

Ed Stetzer gives sound guidance for Christians in response to this tragedy and tragedies in general. Offering the example of the Christians in Charleston is a powerful lesson we all need to humbly learn.

Ben Carson was on CBS This Morning earlier this week. His calm demeanor is fascinating as he was asked pointed questions about the Second Amendment. Watch the interview and appreciate the history lesson Carson offers.

The name “Kevin Corcoran” may not mean much today. In fact, I didn’t recognize this actor’s name when it was announced he passed away this week.

But then I saw the list of movies of which he co-starred, including Old Yeller, The Shaggy Dog, Pollyanna, Swiss Family Robinson and many other Disney favorites, and I immediately remembered the young boy who often played the sidekick role or the pesky little brother with an abundance of curiosity and spunk.

I am a huge fan of the classic Disney live action films. I know I would be slated an “old geezer” if I were to say they don’t make movies like these anymore. However, there is a special element of presentation, the soundtrack (background music), the likeability of characters, the creative plots, the innocence and integrity of the heroes that make these movies much MUCH more enjoyable.

I know very little about Mr. Corcoran’s real life, but I read he is survived by his wife of 43 years. May his family find comfort during this time of grief.

It was big news this week, as the now famous Ten Commandments monument was removed from the Oklahoma State Capitol and transported to the offices of the Oklahoma Council of Public Affairs (OCPA). 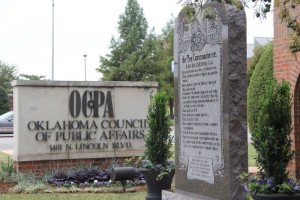 Reports state, “The Oklahoma Supreme Court ordered the monument to be removed from the Capitol grounds in June, saying the Oklahoma Constitution prohibited the state from displaying it. The state appealed that decision but could not get the Supreme Court ruling overturned.”

This is not the last we’ve heard about this monument issue. Expect it to be discussed in the public and legal forums in the coming years. In the meantime, it’s great that the Ten Commandments will be featured outside the OCPA offices on 13th and Lincoln, a visible setting for the monument.

The Baptist Messenger recently featured a story, “App-ed to share,” about a free Gospel app for smart devices. I am learning about this app myself, and I am intrigued. Mike Napier, evangelism specialist for the Baptist General Convention of Oklahoma, gave a brief tutorial this week on how to use the Gospel app. It definitely can make sharing the Gospel with people much easier, especially for Christians who do not share it frequently.

To download the free “EvangelismOK” at the following links:

The Oklahoma City Thunder started the preseason with a win at Minnesota, 122-99. It sounds like the Thunder was in control the entire game. Granted, it’s the preseason and against the T-Wolves, but with all the discouraging news from last season, I’ll take all the early positives the Thunder can claim.

I will get to see the Thunder in person Friday night as they face a team from Turkey, homeland of center Enes Kanter. I look forward to seeing how healthy KD is, how this deep and talented roster performs, and how new coach Billy Donovan leads the squad. But again, it’s only preseason.