It’s a busy time, as October is about to wrap up. So many timely topics to discuss. Here’s six I have chosen in this week’s Doyle’s Half Dozen.

NBA season tipped off this week, and one of the best opening contests was the Thunder hosting the San Antonio Spurs, Wednesday night. This was a phenomenal heavyweight battle between two of the best teams in the league this year.

I knew the Spurs were going to be tough this year. They always are. I knew adding LaMarcus Aldridge would make them even scarier. But either it didn’t register with me in the offseason, or I didn’t pay attention, but it dawned on me last night that the Spurs also snagged David West from the Indiana Pacers. Talk about a deep front court. Usually San Antonio relies on unknown big men, mostly from international ranks. With Aldridge and West on the squad, they now got marquee gamers to go along with Kawai Leonard (a sleeper pick for NBA MVP this year). The Spurs don’t look so ancient anymore.

Now that I’ve boosted the Thunder’s season-opening opponent, I thought the Thunder came away with a huge win, and it took a full team effort. With Leonard guarding Kevin Durant and challenging KD all night, the Thunder’s top player did not have such a great returning performance, after last year’s injury-riddled season. But he, along with about four other Thunder players, were strong at pivotal times. Westbrook will be the popular pick for player of the game, but Dion Waiters hit two late jumpers; Enis Canter scored on putbacks and muscle shots, and D.J. Augustine also came off the bench to spark a Thunder rally with a steal that led to fastbreak points.

And there were other contributors, as well. But one thing that stood out to me was the coaching decisions. Billy Donovan and his staff made solid late game assignments, as far as who to have on the floor and how to maintain the lead. Durant may have said it best in the postgame, when he said the Thunder are now “unpredictable” as far as how they will manage their late game performance and who will be the one putting up the winning shot.

Though the long season has begun, be encouraged, Thunder fans, with this opening performance.

I gave analysis on the previous presidential debates, but unfortunately, since I was working the Thunder game I did not see the debate firsthand. Anything I would offer would be recycled commentary, but I am encouraged with the highlights, hearing Ted Cruz, Marco Rubio and Chris Christie take on the CNBC moderators (by the way, I don’t think I have ever watched a minute of CNBC) and rightfully accusing them of staging fights among the candidates instead of allowing them to discuss important issues.

Those three seem to have the best grades among popular opinion. I have not heard anything about Donald Trump, Ben Carson or Carly Fiorina – the non-politician candidates. The same about Mike Huckabee. I heard negative marks on Jeb Bush, Rand Paul and John Kasich.

Taking stock of all the debates combined, one name that seems to remain consistently positive is Rubio.

This seems to be the next issue among religious liberty rights. Joe Kennedy is an assistant high school football coach in Bremerton, Wash. who has made a tradition of praying on the field after every game. Kennedy is on administrative leave from the team because he continued his post-game prayer after he was told not to do so.

Senator James Lankford spoke about this action against Kennedy on the U.S. Senate floor. This 13-minute address is powerful, as he brings up many examples of public prayer that have occurred on the football field. He also best describes how we as Americans observe religious liberty, “We’re not a nation that is trying to purge all faith. We’re a nation that allows people to live their faith.”

Lankford ends his speech appropriately by voicing prayer in the chamber. Watch and be encouraged:

One of my favorite outtakes: “It’s hardly in the best interest of anyone – secular or religious – to ask people in the marketplace to act in ways they consider immoral, just because their views are unpopular at the moment.”

This Sunday, I will be at First Baptist Church in Duncan to hear Caleb Castille speak. He played Tony Nathan in the faith-based film Woodlawn. If you have not seen this movie yet, I strongly recommend you do. Read my movie review here. 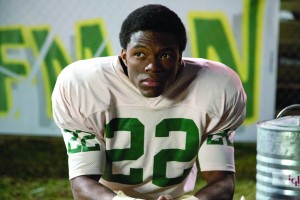 I look forward to meeting Castille, as I plan to interview him for an upcoming story in the Baptist Messenger.

Pastor Andy Finch of Blanchard, First said extending the invitation to include the Bethany team is “a sign of unity in prayer and support for Hudson.”

As I mentioned in my review, this movie can be a catalyst to change lives and invigorate people to share the Gospel. I pray for God’s will to be done in Hudson’s life, to include healing, and may He be made known through this experience.

We all are familiar with what happens on Oct. 31. Though it is popularly observed as Halloween, it is also known as Reformation Day. It is the day in which almost 500 years ago, Martin Luther nailed the 95 thesis to the door of the church in Wittenberg, Germany, thus beginning the Protestant Reformation. The Reformation is what eventually led to churches today teaching the doctrine of salvation being obtained by grace through faith and not of works.

If you would like to know more about Reformation Day, read this piece on Ligonier.org.