It’s been a busy week and the beginning of a busy, but fun, month. As I’m writing this, I just got home from a work Christmas banquet. It was a great time visiting with many great people of whom I have the privilege of sharing ministry work.

As of this month, I have been working with the Baptist General Convention of Oklahoma for three years, but it seems like I just started this job. One of the many blessings I have with this position is being able to share my weekly dozen of topics with you. Let’s get to it!

If you haven’t seen it by now, the New York Daily News featured on its cover the headline “God Isn’t Fixing This,” referring to the tragic shooting in San Bernardino, Calif. The best response to this ignorant conclusion came from Russell Moore in his piece “What we lose when we prayer shame politicians after a mass shooting” that was featured in the Washington Post.

Moore gives many pondering points for different philosophical stripes. He is quick to point out the flippancy that is perceived when political leaders mention prayer. He appears to show objectivity in regards to discussing gun control.

But what he does express emphatically is the importance of prayer. “If you shame away the most human aspects of public life — such as the call to pray for one another — you will find this situation worsening, not getting better,” Moore said.

Both the religious and non-religious can benefit from reading Moore’s article. One of the best suggestions he offers is for everyone to be willing to show support, even empathy, of those who are affected by tragedy and not get caught up in “an immediate search for who is to blame for holding the wrong opinions.”

The San Bernardino shooting is causing some head scratching responses. I think Ben Shapiro’s tweet provides a provoking conclusion – “Radical Muslims shoot people — nothing to do with Islam. Christians pray for shooting victims — their Christianity is the problem.”

Political Correctness and hypersensitivity have gone to ridiculous heights. Media members have engrained in their practices to not report any possibilities of terrorist action being affiliated with Radical Muslims that they must conclude what happened in California HAD to be workplace violence.

To be clear, I am not one to blanket all Muslims. Stacy Neuschaefer’s blog “I used to be afraid of Muslims” presents a perspective I support. However, it’s one thing to express kindness, a willingness to be understanding, and another thing to intentionally be naïve and foolish, such as to not report questionable activity of a neighbor because of fear of being called a racist.

There’s just so much craziness going on that people do not know the difference between being sensible and being hateful. In my DHD two weeks ago, I covered the Syrian refugee issue. Many of the points I made then could be applied to this situation, but one in particular would be is the importance of demonstrating both compassion and caution, if not for one’s own sake then for the sake of others.

Facebook continues to show a trending of a news commentator talking about “White Privilege.” I don’t want to get into details because they are ridiculous. Let me just give a simple suggestion – change the subject.

Anything that involves so-called privilege because of race is just divisive, and no good can come from it. Demonstrate kindness to everybody. Treat everybody fairly and with respect because this is a reflection of who you are.

Next week, I have a story in the Baptist Messenger about a man who was one of many who received the blessings from Oklahoma Baptist Disaster Relief. Darrell Hadley, an Oklahoma City resident who is 80 years old, was out in his yard cleaning up the results of the ice storm that hit the state last weekend. One of DR’s chain saw teams answered a call from Hadley’s next-door neighbor.

When a team member saw Hadley, who was recovering from hand surgery, cutting up tree limbs, he told Hadley to put down his saw because they were going to clean up his yard for him.

“Dear Lord, the angels have come down!” Hadley exclaimed. He said it would have taken him more than two weeks to clean up his yard of all the tree limbs, and the DR team had it cleaned up in less than three hours.

Sam Porter, DR director, said they have received more than 1,000 requests from families needing assistance. There are 15 chain saw teams working this weekend and next week, but Porter said “We need hundreds of volunteers immediately to just move limbs to the curb not requiring any chain saw work or heavy equipment.”

If you are a leader of a youth group, or a Sunday School class or just can volunteer yourself, show up at FBC Yukon, 15 S. 6th Street, this weekend, or email oksbdr@gmail.com to let them know you are interested in volunteering. Be sure to have work gloves and work boots.

If you have never met Willa Ruth Garlow, you have missed out on how much of a blessing this lady is. She was visiting my church last Wednesday to do a presentation of Lottie Moon, the famed missionary to China.

I saw her out in a hallway and went up to greet her. “Do you remember me?” I asked her.

“Well no, Mr. Doyle, I don’t remember you!” she responded, and we both laughed.

This dynamic woman is an excellent spokesperson. I’ve seen Willa Ruth give dramatic presentations, and people of all ages can’t help but be engrossed as she talks. 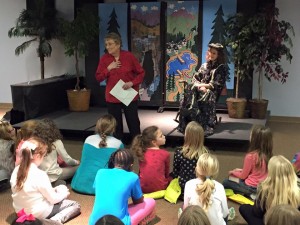 This is a picture of Willa Ruth, sharing the story of Lottie Moon with children, with Angela Lee, her granddaughter, portraying Lottie Moon.

Tony Reinke offers his top 15 non-fiction Christian books of 2015. This is a great list, and I’m glad he features Moore’s book Onward and gives it high regards.

If you have an interest in Christian authors, you may enjoy perusing this list as well. One book that caught my attention is Os Guinness’ book Fool’s Talk: Recovering the Art of Christian Persuasion.

Reinke writes “We are all apologists now, says Guinness, and he’s right. Thanks to social media, particularly Facebook, each of us can speak to a larger immediate audience than any generation in history. This is a book to help all of us learn the important skill of Christian persuasion inside a pantheon of political conversations.”