This may be one of my shortest DHDs ever. I have a lot going on, which I will explain in topic #6. Here we go!

If you have followed me for a while, you know I’ve expressed my support for Marco Rubio in the GOP presidential primary. The Florida senator remains in the race, but I’m afraid he will be out soon. Florida’s primary next Tuesday will potentially be his last stand.

His fall began at the New Hampshire primary. He somewhat recovered after that, but he became too aggressive while attacking Donald Trump on the campaign trail and then in his debate brawls with Trump. His campaign was a clean one until the last few weeks. Super Tuesday II, March 8, became the telling sign that Rubio was no longer a promising candidate, as he collected a slim count of delegates.

I now believe Rubio should pursue running for governor of Florida. I still like him as a politician and agree with his platform. Maybe it’s possible for him to reappear in the national election down the road.

I will say this for Donald Trump. The man can conduct the most bizarre press conferences. Referring to his conference he had Tuesday night, I have never seen a politician give a campaign speech like the one he gave that night, appearing in front of supporters and media members with all of his namesake products.

Though I have respect for Ben Carson, I still cannot vote for Trump. I will not vote for anybody who does not demonstrate respect for the sanctity of life. Trump has said he is pro-life, after many years of saying the opposite, but his consistent defense for Planned Parenthood causes me to be skeptical.

As Boatwright points out, the movie begins stating it is a fictional tale about Jesus. The movie’s director says it is imagining a year in the life of Jesus as a boy.

I believe there is a reason we do not know much about Jesus as a boy. We are told that he grew in wisdom, stature and favor with God and man (Luke 2:52). The part about him growing in favor with man causes me to think Jesus did not perform miracles as a boy or did anything extraordinary. At the beginning of His earthly ministry, when he did amaze people with his teachings and miraculous works, Jesus lost such favor with most men. But this is just my opinion.

I’m not against anyone seeing the movie. If you do go see it, I welcome your feedback. 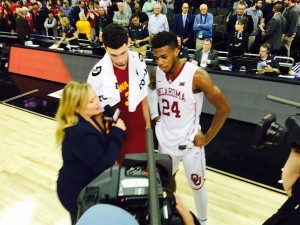 I didn’t watch the OU-Iowa State game at the Big 12 tournament, but I heard about it. I heard it was quite a display of scoring from OU’s Buddy Hield and ISU’s Georges Niang. I also heard both of these conference greats shared a post-game interview on ESPN. I love hearing stories like this.

Kenny Mossman, OU associate athletic director, shared on Facebook that Hield wanted his teammates on the court with him when he accepted the Big 12 Player of the Year award. Mossman posted, “Buddy does a pretty good job of living Phil. 2:3 … ‘Do nothing out of selfish ambition or vain conceit. Rather, in humility value others above yourselves.’”

Congratulations Buddy! I hope you go far in the NCAA Tournament so more people can experience your example of good sportsmanship.

I’m not going to be around for the announcement of the NCAA Men’s Basketball Tournament bracket seedings. I will share more in my final topic. This will be the first time in more than 30 years I have not filled out a bracket, and I will miss the first and second rounds of the tourney.

So, with that being said, not knowing how the teams will be seeded, I predict Oklahoma and Michigan State in the championship game, with the Sooners coming away with their first NCAA basketball championship.

On Saturday, I will be leaving the country, going overseas for eight days. I will be in Europe, but that is all I am able to share on social media. There are 12 in our team, and we are excited for what we will experience.

With this, I won’t be posting a Doyle’s Half Dozen next week. I covet your prayers for safety, for God’s provisions and for Him to be glorified.