April is now in full swing, and it’s always a blessing to experience the joys of spring after the sheltering conditions of winter. Though winter was rather calm in Oklahoma this time, there is still a difference in outside activity, especially in my neighborhood as the joggers and dog walkers were more noticeable this week.

The usual combination of politics and sports make up the majority of this week’s topics in Doyle’s Half Dozen. Enjoy!

Former White House press secretary Ari Fleischer offered a letter to Donald Trump, assessing the candidate’s campaign as it stands right now. If Trump were to follow Fleischer’s five recommendations, I would consider changing my perspective. Notice I said “consider.”

With that in mind, I single out Fleischer’s point of Trump needing to learn more policy. “Your comments about abortion were a double-edged disaster. You alienated everyone. They showed you are not familiar with the background of an important emotional issue. Anyone aware of Right to Life’s thinking knows, mothers are not criminals.”

As invested in politics as Fleischer is, he even points out that abortion is an important issue. He may only care about getting votes, but at least he is tuned in to what matters to social conservatives. I think he is right when he says Trump won’t get beyond his current supporters if Trump continues to operate his campaign in this manner.

If there is one consolation to Trump’s failure to understand viewpoints on the abortion issue, at least he is not alone. Earlier this week, Hillary Clinton alienated everybody with her foolish response to Chuck Todd on NBC’s Meet the Press, regarding when or if an unborn child has constitutional rights.

Clinton directly admitted the “unborn person” does not have rights. She then went on to say that everything should be done to help a mother carrying a child and to make sure the child will be healthy and have appropriate medical support.

So the child, by her admittance, should be cared for yet doesn’t have the right to live? Of course, I’m going to be disturbed by her foolish response, but then, on the other side, the abortion people were cringing every time Clinton said “person” or “child” instead of saying “fetus” and trying to avoid the heart of the question by making some sort of attempt to discredit the scientific evidence of personhood.

By the way, for the first time ever, I’ll give Chuck Todd a nod for asking Clinton such a strong question.

Todd’s terminology at the beginning of this segment is not objective in regards to religious liberty, but I thought he was fair in allowing Moore to speak openly and give excellent responses to the ACLU’s incorrect assessments.

Watch for yourself here.

Earlier this week, the California Department of Justice raided David Daleiden’s home and seized all footage of his famous videos that exposed Planned Parenthood’s practice of selling aborted baby parts.

I feel bad for Daleiden and the legal pressures he is facing, including a criminal charge in Houston. May God continue to provide him grace and wisdom during these difficult days.

But this is a good sign that what Daleiden is doing is right because the elected officials who are chastising him have been proven to receive financial backing from Planned Parenthood.

The more Daleiden is in the news regarding his exposing videos, the stronger his case becomes or remains.

Oh how the talk seems to never end about Kevin Durant and where he will play next season. Darnell Mayberry wrote about former Thunder player Kendrick Perkins giving his perspective.

I’ll elaborate in a later DHD about Durant facing free agency. But here’s the short take. If KD’s decision is based on money, he stays with the Thunder because of the Larry Bird Exception.

If he bases his decision on other things, then who knows where he will be next season. Again, I will give more input closer to the July 1 deadline.

For the first time ever, I’ll be attending OU’s spring football game. I don’t get caught up too much in Sooner football during the spring. My focus is definitely on basketball, and I have a hard time keeping interest in the team playing against itself. I’m not saying it’s not constructive. I know it is. However, in my former life of working in college sports information, keeping stats for a confusing structure of game-type scenarios was not a fun time.

But this Saturday will be different because it will be an early opportunity to experience the full enclosure of OU’s stadium. For once, I’m letting the superficial affect me in watching a football game. Or a so-called football game. 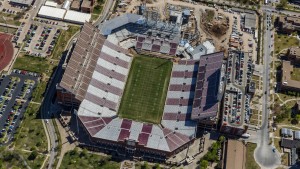