Forward Thinking About Falling Back

Benjamin Franklin, William Willett, George W. Bush and Coldplay – what does this group of seemingly mismatched men have in common? They each play a roll, or have an interest in saving time. Better said, their interest is in seizing opportunity to make good use of time, while saving coal, candles and kilowatts. Beginning in March 1918, we here in the U.S. set our clock forward by an hour, only to fall back again the first Sunday in November. 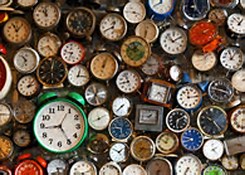 I don’t have statistical data about the amount of wax we’ve managed to save over the years, but I do agree we should not only save time, but we should also seize every opportunity to use our time – to save.

In Acts 3, two of 12 from another list of seemingly mismatched men, were making their trek up to Jerusalem to pray in the temple. There at the temple gate sat a man lame from birth, begging. The Bible says in verses 3-6, “When he saw Peter and John about to enter the temple complex, he asked for help. Peter, along with John, looked at him intently and said, ‘Look at us.’ So he turned to them, expecting to get something from them. But Peter said, ‘I don’t have silver or gold, but what I have, I give you: In the name of Jesus Christ the Nazarene, get up and walk!’”

Taking time out to save, on this otherwise ordinary day, altered everything –for all time (pun intended).

This man “jumped to his feet and began to walk. Then he went with them into the temple courts, walking and jumping, and praising God. When all the people saw him walking and praising God, they recognized him as the same man who used to sit begging at the temple gate called Beautiful, and they were filled with wonder and amazement at what had happened to him” (Acts 3:9-10).

The disciples could have passed right on by this man, without noticing him, as I imagine they have done before. This is not the first visit to the temple for any of these three men. This day is different. This day Peter, John and the Holy Spirit made their way to the temple to pray. This time, the disciples looked at this lame man, and according to verse 5 – he saw them too!

After seeing these followers of Jesus, the Bible says the lame man expected something. Peter and John were known, and they were known to have been with Jesus. When you have a reputation as a Jesus follower, people expect something from you. Peter said, “I don’t have silver or gold, but what I have…” You may not have everything some folks need, but what you do have (love, respect, grace, kindness, forgiveness, faith, strength, joy) give it!

That day at the Temple gate, this lame man received much more than he ever expected. He is now saved from his disability, yes, but he knew instantly he had been saved from far more than a physical circumstance. While this man took time to express his overwhelming gratitude, through praise and worship, others were watching. The people stood amazed, as Peter explained by what name and power this miracle took place. As a result, Acts 4:4 says, “many who heard the message believed. The number of men who were saved grew to about 5,000.”

I pray we never underestimate what can be done through each of us, by the power of the Holy Spirit, in the name above all names – Jesus Christ of Nazareth.

A man ahead of his time!

God placed passion in Ginger’s heart for His word and the unquenchable desire to share the transforming power His word contains. As a writer, speaker, teacher, and pastors’ wife, she shares her journey with inexpressible gratitude for God's unconditional love, sustaining power, unwarranted grace, rich mercy, and continued blessings!

God placed passion in Ginger’s heart for His word and the unquenchable desire to share the transforming power His word contains. As a writer, speaker, teacher, and pastors’ wife, she shares her journey with inexpressible gratitude for God's unconditional love, sustaining power, unwarranted grace, rich mercy, and continued blessings!