I believe that men are the lynch pin in the family, the church and the culture.

We’ve been created by God to be warriors, to be champions, to be leaders, to be change agents, but sadly we’ve fallen for the lies that the enemy has spun, and we’ve settled for scraps when we should be dining at the table with the KING. We have been made for so much more.

You see, men have been give the power (through the power of Jesus Christ) to do so much more. We’ve been given the power to break and DESTROY strongholds in our lives.

The fact is that we as men have been created to be WARRIORS!  And what’s happening on a wholesale level is that the enemy is whispering in our ears that we could never ever be what God has called us to be, so sadly, what happens so often is that men just give up and settle. We settle when we should be achieving and overcoming.

Take a look at this!

2 Corinthians 10:3-6 – “For though we walk in the flesh, we are not waging war according to the flesh. For the weapons of our warfare are not of the flesh but have divine power to destroy strongholds. We destroy arguments and every lofty opinion raised against the knowledge of God, and take every thought captive to obey Christ, being ready to punish every disobedience, when your obedience is complete.”

You’ve been given the ability to destroy the strongholds in your life!

In saying this I want to tell you all about an event that I think could change the game for many, many men!

It will be held at Bartlesville Southern Baptist Church at 8:30 a.m.

Speakers include Keith Burkhart, Cody Bobay and me! 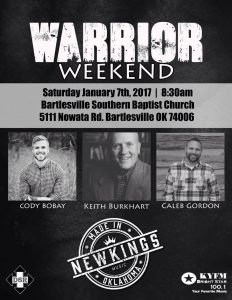 If you’re tired of where you are, this weekend could change everything.

MAKE plans to be there with us. I mean it. Write it down on your calendar now and commit!  It’s time for your WARRIOR to be unchanged and set free!

Caleb Gordon is a Communicator and Life Coach in Bartlesville, Oklahoma.

Caleb Gordon is a Communicator and Life Coach in Bartlesville, Oklahoma.