We’re in the middle of a snow day. This, of course, has no direct bearings on my usual Friday schedule. I know many are enjoying the snow, while Olive and I are snuggled in my chair, as I type out my thoughts on six timely topics for this week’s Doyle’s Half Dozen.

OU running back Joe Mixon announced he has declared to enter the NFL Draft and forego his remaining college years. I think this is the best move for everybody involved.

This young man had a clouded career with the Sooners, and those clouds would have lingered next season. He did a horrible thing soon after his 18th birthday, and the aftermath over the last two years has been an ongoing sentencing by the court of public opinion, which only heightened last month after the release of the video showing Mixon punching Amelia Molitor.

I addressed Mixon’s crime in Sept. 2014 in a blog, offering two takeaways to observing Christians: 1. Everybody is vulnerable; 2. Pray don’t pounce.

I also offered the example of another OU player, Ryan Broyles who overcame a lesser offense and cleared his reputation. Dusty Dvoracek is another example, as the former OU defensive lineman assaulted a friend who had to be hospitalized. Dvoracek also was suspended, returned to the team and then played for the Chicago Bears. He is now a local sports radio personality and an ESPN college football analyst.

We will see what the future reveals for Mixon. Hopefully he follows a similar path of redemption.

As promised, I intend to keep up with how the Trump presidency and U.S. Congress handle pro-life issues. Congress is looking favorable from the get-go. House Speaker Paul Ryan announced this week that defunding Planned Parenthood, the world’s largest abortion provider, is in the works.

I’m predicting this to be a messy process because, as the linked story stated, the mainstream media is basically a “PR agency” for Planned Parenthood. And Planned Parenthood is a powerful, influential organization.

I am also keeping tabs on soon-to-be President Trump. He offered mixed signals about Planned Parenthood during the campaign, saying he is Pro-Life but also was complimentary to the abortion organization saying PP “helped millions of women.”

Passion Conference is in its 20th year, as one of the largest gatherings for Christian college students and young adults. Meeting in Atlanta this week, Passion Conference features well-known Christian artists and speakers and has drawn more than 50,000 Christian Millennials from all 50 states and 90 countries, according to reports.

As Faithwire.com states, whenever political events such as Occupy Wall Street and Black Lives Matter draws large number of Millennials it is blasted all over the media. However, Passion Conference fills up the Georgia Dome and not a peep.

“The media has been quick to report and highlight the number of those leaving faith, but don’t seem as enthusiastic when the reverse is happening,” the report from Faithwire.com said.

The first week of the year is known as “At Home Week” for those who work at the Baptist General Convention of Oklahoma. All the different teams gather to hear reports from BGCO executive team leaders and to pray for the many things that will happen over the course of 2017. There also is a time of recognition of the many who have observed milestone years (5, 10, 20, 30 years) of service at the BGCO. This time also is when the “Second Mile Award” is presented. It’s the BGCO’s version of “Employee of the Year,” but with the intention of recognizing someone who will go above and beyond what would be expected of them and their position.

Both Grant and Hannah are awesome and deserve such recognition, and I am thrilled they received these honors among the many great people who work at the BGCO.

Last week, I announced that my New Year’s Resolution was to share the Gospel every week. Unfortunately, though the week is not over, I have failed to do that in the first week of the year. I still have the remainder of Friday and Saturday left, so maybe it can still happen that I discuss the Gospel with someone.

The reason I placed this standard on myself is I want the Gospel to be a part of my regular conversation. I don’t intend to be legalistic about it and shame myself if I don’t meet a weekly quota. God is in control of those He brings into my life. Through the Holy Spirit, God is the one who can change someone’s life, but He also commissioned us as followers of Christ to share the Gospel to all nations. May I be sensitive to those who need to hear His powerful life-changing message.

Tonight is a major event in the life of my wife Karen. For the past five years, she has been pursuing her dream to become a police officer. She went through multiple avenues for training and preparing. She also experienced road blocks, bumps and detours.

Recently, she completed all her requirements to become a reserve Oklahoma County deputy sheriff, and tonight is her first time to be on duty. I’m so happy for her because going through all the rigors she experienced over these past years, she finally achieved her goal. 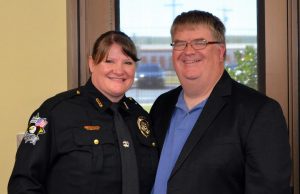