It’s beautiful weather at the moment. Let’s see if it remains beautiful when I complete writing about six timely topics for this week’s version of Doyle’s Half Dozen.

I had the privilege of covering the Oklahoma State Evangelism Conference on Monday and Tuesday at First Southern Baptist Church in Del City. People across the state come for the opportunity to connect with other Oklahoma Baptists and be inspired and encouraged to share the Gospel.

I heard many great speakers. Thom Rainier, president of LifeWay Christian Resources, was the keynote speaker Monday night, and Frank Turek, apologist and author of the book I Don’t Have Enough Faith To Be an Atheist concluded the conference Tuesday night.

I heard a multitude of stories. If I gave an accurate account of how many tales were told, there would’ve been enough to fill an edition of the Reader’s Digest. The majority of them involved connecting with people and sharing the Gospel with them.

One of my favorites was told by the very first speaker of SEC. Tom Elliff, retired president of the International Mission Board and longtime Oklahoma pastor, spoke about having eternity in mind whenever you talk with people. He spoke to a waitress often at a restaurant and shared the Gospel with her at least four or five different times, he said.

He and a church intern went to lunch, and Elliff was encouraging the young man about connecting with people with the intention of sharing the Gospel, even if it means they don’t accept Christ at that setting. Just as the two of them sat down, the waitress came to their table, and said to Elliff, “I’m ready.”

Elliff responded to her, “Okay, do you want to pray or do you want me to lead you.” She replied, “I know what to pray.” And Elliff said at the SEC, “She prayed herself right into Heaven!”

May we all be challenged to share the Gospel with everyone, even if they don’t believe after that presentation. God will stir the hearts of those who hear and have been exposed to the powerful message of the Gospel.

So what will be the next issue or action President Trump will do to get people riled up?

This time last week, he was making known his temporary travel ban in the U.S. involving seven countries. The timing and wording of his executive order was not the best. But boy howdy there were a lot of tempers flaring last weekend. It must have been a record how many times Psalm 82 was quoted on Facebook, as well as the phrase “nation of immigrants.”

He also announced his nomination for the Supreme Count. Neil Gorsuch is now in the spotlight and on the hot seat. Many people I admire believe Gorsuch is a good pick, and since selecting a Supreme Court nominee was one of the most popular reasons for why people voted for Trump in the last presidential election, I am thankful for how this SCOTUS pick resulted.

Dear friends, may I offer a suggestion? Don’t post your immediate anger on Facebook the next time Trump does something. I’m not saying you have to agree, but Trump only has been on the job for two weeks, yet it seems blood pressure rates are skyrocketing.

Plus, you may need to do more research before you go off on the next Trump decision. Like learning how other presidents may have made similar decisions. 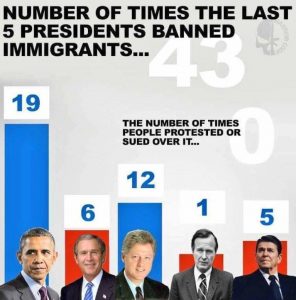 Give at least two days after reports come out about Trump’s next controversy. Sure, you won’t be the first to comment, but you might be saved from looking silly.

The intelligent person restrains his words, and one who keeps a cool head is a man of understanding (Prov. 27:17).

If you haven’t already read Ryan Smith’s “The Day Social Media Died,” check it out here.

This week Boy Scouts of American announced they are now accepting girls who choose to be identified as boys. Read Baptist Press’ report here.

All I will say, is this is not a surprise. The process of the Boy Scouts succumbing to the Sexual Revolution over the past few years was way too easy to predict.

The writer gives a fascinating take on Russell’s whirlwind season. I love reading about his methodology of how he goes about his life and game preparation. I knew about the ritual of Russ eating PBJs.

The only thing I didn’t care for is the slap about OKC taking the team from Seattle. Puh-lease!

I work with a great crew on the Communications group at the Baptist General Convention of Oklahoma (BGCO). I already mentioned the week started out with a full two days at the State Evangelism Conference. On Wednesday, we had “At Home Day” at the BGCO, which is a monthly meeting of all BGCO employees.

I was excited to hear two of my newest co-workers share their testimonies during At Home Day. Stephanie Boone, BGCO COMM group ministry assistant, and Emily Howsden, Messenger staff writer, shared how they made a profession of faith in Christ, as well as other experiences of their spiritual journeys.

It’s been a joy to work with both of these young ladies since they came on board in Oct. Hearing them share what God has been doing in their lives was an extra blessing to me.

Praise God for such an awesome workplace with wonderful co-workers!

I don’t have a big interest in the Super Bowl this weekend. I’m predicting the New England Patriots to win, but I will be rooting for the Atlanta Falcons.

It is exciting to hear about ministry opportunities happening in Houston, this year’s Super Bowl host city. Baptist Press reports a group of Disaster Relief volunteers helped with repairs around H-town this week, highlight what is being called Super Week of Caring.

Another BP story tells how NFL players deal with pride. One said pride is “one of my biggest sins, by far.”

Patriots offensive lineman Nate Soldier opened up about his 3-year-old son battling cancer. “I felt a glimpse of the pain that God sacrificed for us when He gave up His one and only son,” Solder said.

Finally, Falcons tight end Jacob Tamme shares about suffering an injury that will have him on the sidelines during the Super Bowl, but he remains strong in his faith in God. I was pleased to read the comments Tamme made about “God’s bigger than we think He is.”

The weather got colder as I conclude. Such is the way of life during an Oklahoma winter.