It’s a great day. It’s a cloudy, rainy day, but such can still qualify as great.

Olive’s at the groomer, so she’s not in her usual locale, sitting with me in my chair while I do my weekly DHD. But I’ll trudge on, offering thoughts on six timely topics.

This is a fantastic read, but it’s one that will need some time to digest. I think he covers all of our traits objectively.

By his descriptions, I would lean more toward conventional, but I would like to explain one of my intentions involving politics. I don’t consider myself as having to remain loyal to the Republican Party. But since I believe Sanctity of Life to be the leading political issue, and with the majority of Democratic Party leaders coming out to say, even recently, they don’t want to have anybody who is pro-life in their party, I sincerely struggle with any Cosmopolitan Southern Baptists trying to support a Democratic candidate.

The GOP definitely has flaws, but anybody who points them out with the intention to promote someone who favors abortion, well, I’m sorry. You’re going to have a difficult time convincing me your intentions are biblical and godly. Actually, it won’t be possible.

I would enjoy discussing feedback about Wax’s blog. Tell me how you fall in his descriptions.

Tis the season for wild weather in Oklahoma. Just this week, tornadic conditions affected Elk City and the western region. Many homes were destroyed, and one fatality was reported. May God bless those who experienced loss.

Though these are difficult circumstances, it is a time for the volunteers of Oklahoma Baptist Disaster Relief (DR) to serve and share the Gospel. The people in yellow apparel do amazing work, caring for those whose lives have been instantly turned upside down.

Sam Porter, DR state director, has done his usual masterful job leading the DR army, and I was encouraged when I heard him give a report on News 9 Tuesday night. He also appeared on the other networks.

Another DR leader who is doing yeoman’s work is another DR – Danny Ringer. Elk City is Danny’s stompin’ grounds, so it’s no surprise he is leading up a great crew to help serve those affected by the storm.

Danny has so many hats I couldn’t mention all of them, and I probably don’t know all of what he does. I do know he serves as the director of missions in Beckham-Mills Baptist Association, and he is a regional leader for Disaster Relief, as well as with other community services.

Much still needs to be done to help Elk City recover, but with both DRs involved, I am confident they are in good hands.

I love this story so much, I think it needs to be made into a movie.

Baptist Press (BP) reported Horace Sheffield, an 88-year-old retired pastor, recently graduated from Shorter University in Georgia. After 50-plus years when he originally enrolled in college, he finally received his diploma. Check out his story through the link.

The part I found especially encouraging was the help of Amanda Brannock, an early literacy teacher who doesn’t specialize in helping senior adults get college degrees, but because of the spiritual influence Sheffield had on her family, Brannock wanted to help him reach this accomplishment.

Both Sheffield and Brannock walked across the stage together at Shorter’s graduation commencement this month to receive his diploma. “We went in as a team, and we wanted to come out as a team,” Brannock said.

I love both photos that BP shared of Sheffield with his great-grandkids and of both Sheffield and Brannock meeting Shorter’s president on stage. You can see in Brannock’s face her emotion of this accomplishment. 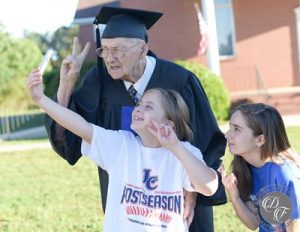 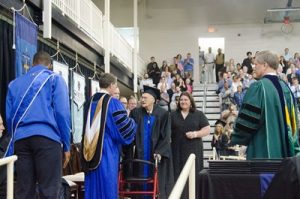 So yes, I think this should be made into a movie. I wonder if any filmmakers in Georgia (ahem, Kendrick Brothers) would consider doing this.

Congratulations to Russell and Nina Westbrook! The NBA All-Star and his wife had a baby boy. Noah Russell Westbrook was born on Tuesday, May 16. Two of my favorite sources for baby names is the Bible and family. I’m happy for my favorite Thunder player and commend him and his wife for their son’s name selection.

By the way, the Social Security Administration announced the most popular baby names in Oklahoma this week, and “Noah” made the list.

Molly Worthen, an assistant professor of history at the University of North Carolina, wrote a great article on the New York Times website about the proper way to address college professors and the importance of using proper writing skills in email.

Good writing skills are becoming obsolete today, even on a college campus. I appreciate Worthen speaking out, not only because accomplished academicians and others in authority deserve to be respected, but also because showing respect says as much about the one who offers it.

In other words, something I’ve shared in the past, “What I say about you says more about me than it does about you.”

I’ll give props to my friend Stephanie Boone for my subhead. She shared with me a hashtag “a decade of doyles.”

Today is the day, May 19, 2017, my wife Karen and I celebrate our 10th wedding anniversary. I love Karen very much and appreciate her willingness to do “life” with me these last 10 years. We have laughed a lot and experienced many adventures (some planned, some unplanned).

I pray God allows us to do a double decade, indubitably! 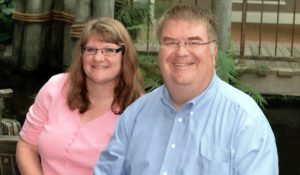