Categories Menu
Home » Culture » Review: ‘The Nut Job 2’ is surprisingly good, with a...

Review: ‘The Nut Job 2’ is surprisingly good, with a solid lesson about hard work

Surly is a big-city, bombastic purple squirrel who is living in, well, squirrel heaven. At least, that’s how he and most other squirrels see it.

It all started when the local Nut Shop business closed its doors and left a lifetime supply of nuts in the basement. No longer would Surly and his companions be forced to search for nuts. Instead, they could sit around, cook nuts all day, and party. Sure, they’ll eventually lose their natural instincts, but who cares?

“This is the life – literally doing nothing,” he says.

But laziness has its downsides – like when a fellow squirrel fails to shut off a boiler. That, in turn, causes the Nut Shop to explode, which, in turn, vaporizes their food supply.

“Where are we going to find food?!” one young squirrel asks.

Andie – an optimistic female squirrel – has an idea: They’ll hunt for their food in the local park.

But the crooked mayor has other plans for that lovely patch of greenery: He wants to turn it into an amusement park because, as he sees it, amusement parks provide more rides, more fun, and more profit. You can’t make money from children playing on the playground!

It’s all in The Nut Job 2: Nutty by Nature, which opens this weekend and continues the crazy antics of Surly (Will Arnett), Andie (Katherine Heigl) and Precious the dog (Maya Rudolph). Actor Jackie Chan voices a new character in Mr. Feng, the leader of a street mouse gang. 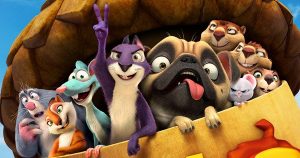 Although Mayor Muldoon (Bobby Moynihan) has the power of the city behind him, Surly and his squirrel posse aren’t going to give up without a fight.

The Nut Job 2 is one of the more entertaining animated films of 2017. It also has several life lessons. Let’s look at the details …

Minimal/moderate. The desperate squirrels resort to violence to ward off the mayor’s construction crew. No one gets hurt, but it made me a little uncomfortable. They cause a tractor to wreck. They tear up a construction trailer (and the money in it, too). They throw a portable toilet in the river. They toss a swarm of bees in the cab of a tractor. Later, the mayor decides that violence is necessary to remove the animals, and dynamite is used to try and kill them (It fails). The squirrels and some of their animal friends attack the amusement park, starting ketchup and mustard “wars” and hitting someone who is playing whack-a-mole over the head with the mallet. The mayor’s bratty daughter is the most disturbing character in the movie, pulling heads off dolls and also forcing her dog to play dead (she play-shoots it) before she feeds it.

Minimal. Frankie, a male dog, says to Precious, “I know this relationship is moving fast, but when it’s right, it’s right.” The same dog also drools while looking at his female crush.

Andie emphasizes the importance of hard work over laziness (see Worldview, below). She also shares the nuts she had stored for winter with others. Characters do commit crimes, but they are caught and pay the price. The squirrels who had lived in the Nut Shop basement learn to appreciate the outdoors.

Frankie tries to impress Precious by regurgitating his previously eaten food, supposedly so she can eat it, too. Later, she tries to do the same thing. Yuck.

We briefly see the mice meditating, with their hands in a Gyan Mudra position.

One character says, “If you don’t help me save my friends, I’ve got nothing to live for.”

Unlike some animated films (say, The Emoji Movie), The Nut Job 2 is full of lessons. We learn about hard work, generosity, self-sacrifice and teamwork. There’s even a brief lesson about waking up early!

The movie flirts with the notion that animals are good and humans are bad, but it stops just short of that and delivers a satisfying ending. Surly even says in the end: Many humans are good. Besides, the mayor was an awful guy. And, it is a bad idea to turn a nature park into an amusement park.

Scripture has a lot to say about work and about laziness: “If anyone is not willing to work, let him not eat” (2 Thess. 3:10). “The desire of the sluggard kills him, for his hands refuse to labor” (Prov. 21:25). The Bible begins with a story of God working, and then it tells us that God commanded Adam to work (Gen. 2:15).

She wants everyone to rise early and hunt for food, but Surly wants to sleep in.

“There are no shortcuts in life,” she adds.

In the end, Andie’s ideas prevail.

This lesson about hard work is underscored in the mayor’s amusement park. He wanted to cut corners. It was a bad idea.

Most of the violence is of the Looney Tunes variety, but I wish it would have been dialed back a bit. Still, it has minimal potty humor (a big achievement in 2017) and it has no language. For little ones, it’s mostly family-friendly.

Hardees, Carl’s Jr. and Menchie’s Frozen Yogurt are the three most well-known partners (at least for kids).

The Nut Job 2 is genuinely funny, even if it doesn’t rise to the level of, say, Despicable Me. The lesson on hard work is a good one.

Does anyone find jokes about regurgitation funny? I don’t. Also, the mayor’s bratty daughter is too bratty. Simply put, she’s annoying.

I didn’t expect much out of The Nut Job 2. But I was pleasantly surprised. Thumbs up.

The Nut Job 2: Nutty by Nature is rated PG for action and some rude humor.