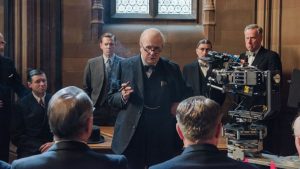 Nazi Germany is on the move, but everyone in 1940 Britain can rest easy. Winston Churchill is finally at the helm as prime minister.

If it were only that simple.

“We have a drunkard at the wheel,” says one member of Parliament.

“I wouldn’t let him borrow my bicycle,” says another.

The fretting is no small matter. Hitler has conquered most of Western Europe and is on the verge of occupying France. Britain, likely, is next. As we learn in Darkest Hour, Chamberlain and a handful of powerful MPs – all members of Churchill’s own party – are plotting to remove him from power. Their goal: Sign another peace agreement with Hitler and hope for the best. Churchill, though, is determined to go down fighting – even though his entire army is surrounded on the beaches of Dunkirk, France.

“You cannot reason with a tiger when your head is in its mouth!” he tells his own party.

It’s one of the most inspiring biographies I’ve seen, and it succeeds largely because it depicts elements of Churchill’s story many Americans don’t know. He came to power following a coup and then nearly was toppled in a coup. He had to fight isolationist and dove-like tendencies within his Conservative Party, despite the ominous threat from Hitler. And he was a man full of weaknesses, including fear and doubt.

Of course, like any Hollywood film based on real events, it’s full of some fiction, too. Stay tuned for those details.

Minimal. For a film based on a war era, there is a surprising lack of violence. That’s because most of the scenes take place in Parliament, in Churchill’s home, or on the streets of Britain. But we do watch several bombs drop, and we do see a field hospital with several wounded men. We also hear talk of war strategy, including whether some men should be sacrificed so a larger number will survive.

Minimal. We hear Churchill in the bathtub, and we then see the bottom half of his bear legs walk across the floor.

Minimal. I counted only a handful of coarse words: d—n (3), misuse of God (2). There are also several uses of British words such as “bloody,” “bum” and “bugger.” The phrase “up your bum” is heard a few times in one scene in reference to something Churchill naively did in a newspaper picture (He showed photographers a backwards peace sign, which at the time was considered vulgar).

The love between Churchill and his wife is obvious. During one poignant scene after he makes his secretary cry, his wife scolds him and says: You aren’t as nice as you once were. “You’ve become rough… I want others to love and respect you as I do.”

To his credit, Churchill learns to treat his young secretary gentler, and they become a good team.

During his speeches, we also hear a couple of references to God.

Churchill smokes (cigars) often, drinks often and eats a lot of unhealthy food, too. When the king asks him how he manages to drink so much – including drinking in the morning – Churchill answers, “Practice.”

The film’s overarching message is true to history, but some of the scenes are fictional. Specifically, a scene in which Churchill boards a subway and talks to everyday British citizens – a scene that led me to tears – is fictional.

The on-screen Churchill provides us lessons on courage, determination, steadfastness and overcoming fear and doubt. It also gives us a solid example on opposing evil.

When Christians debate the necessity of war, World War II is often cited as an example of a just war. Consider: A murderous mad man was marching across Europe, killing indiscriminately and wiping out an entire ethnic class. What would the world look like today if Britain and Churchill hadn’t stood firm?

War is a terrible thing, but in a fallen world, it is sometimes necessary (Ecclesiastes 3:8). After all, one of the primary responsibilities of government is to protect its citizens (Romans 13:1-4). Sometimes, such efforts won’t be successful, but thankfully during the 1940s, it was.

The movie also tosses a few ethical dilemmas our way. For example, Churchill must decide if he will send a group of 4,000 soldiers to their near-certain death in order to distract the Germans and protect 300,000 men at Dunkirk.

Learning about the real Churchill – the one who had everyday struggles just like the rest of us. Additionally, the Parliament scenes are impressive. I also enjoyed the back-and-forth between Churchill and those around him, including his wife, his secretary and the king. Oldman and James are marvelous in their roles.

The overtly fictional stuff that was inserted into the film. Churchill’s story is already entertaining. Why make something up?

Darkest hour is rated PG-13 for some thematic elements.