REVIEW: ‘Paddington 2’ is full of lessons – and good family fun

Paddington is a lovable Peruvian bear with a small ego and big heart. But he’s also short on money, and with his Aunt Lucy’s 100th birthday just around the corner, he needs some cash for a gift – and fast. 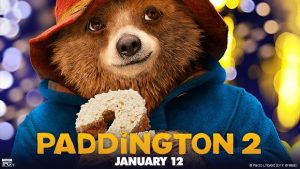 So, Paddington does what any intelligent, talking bear in his situation would do: He works a few odds jobs with the goal of buying a one-of-a-kind, London-themed popup book from the local antique shop. It seems that Aunt Lucy – who lives far, far away — had always wanted to visit the historic city.

“If she saw this, it would be like she were finally here,” he says.

Paddington cleans windows. He washes pets. He even cuts hair at a salon.

But then the unthinkable happens. With his financial goal within reach, someone steals the popup book in the dead of night. Even worse: Police believe Paddington did it, and he is sentenced to 10 years in prison for grand theft.

Will the real thief ever be caught? And can Paddington’s contagious charm melt the hearts of London’s worst criminals, as it did his British family, the Browns?

It’s all part of Paddington 2 (PG), which opens this weekend and shows Paddington facing real-world challenges he didn’t see in the first film (2015). It stars Ben Whishaw as the voice of Paddington; Hugh Bonneville (Downton Abbey) as Henry Brown; Sally Hawkins (Blue Jasmine) as Mary Brown; and Hugh Grant (Four Weddings and a Funeral) as Phoenix Buchanan, a man who has little regard for Paddington.

The character is based on a series of children’s book by author Michael Bond, who died last year at the age of 91.

Like its predecessor, Paddington 2 is a fun film that delivers innocent humor and positive characters rarely seen on the big screen. I laughed – a lot. It’s close to being the perfect family-friendly movie.

Minimal. We learn of a trapeze artist who dies, and we see her bloodless body lying on the ground in a circus-like setting. A character threatens another character with a sword. A character nearly dies underwater due to drowning.

Minimal. We hear a comment, twice, about “nice buns.” It initially is referencing sweet treats, but it is taken as a reference to the human body.

We learn of Paddington’s origins; he was adopted as a cub by a bear couple who made great sacrifices to raise him. “If we look after this bear, I have a feeling he’ll go far,” the female bear says.

We see inmates change for the better because of Paddington’s kindness.

The Browns work diligently to catch the real thief and to have Paddington’s name cleared.

During a scene within St. Paul’s Cathedral, a security guard says in reference to a possible crime: “Only the good Lord knows.”

Paddington cleans a window with soap and his bottom. We see a fortune teller at a local fair (but we don’t hear her predict the future). A security guard in St. Paul’s Cathedral describes a nun as the “most beautiful woman” he has seen (The woman actually was a man dressed as a nun.) We hear someone describe actors as evil people who “lie for a living.” Mr. Brown briefly practices an exercise that looks like yoga.

Paddington delivers several significant life lessons for children and adults, including being kind to everyone you meet, having a positive outlook on life, and looking for the good in others. The movie also gives us an example of characters who change from bad to good.

We live in a cynical society, where sarcasm dominates, selfishness reigns, and everyone is striving to get the last word.

Perhaps that’s why Paddington (2015) and Paddington 2 are so refreshing. The hero is a lovable little bear who was taught at an early age, “If we’re kind and polite, the world will be right.” Sure, he’s clumsy and crazy, but he’s also considerate and caring. Paddington 2 certainly is not a faith-based film, but it nevertheless gives us a character who exhibits more fruit of the spirit (Gal. 5:22-23) than do most other big-screen protagonists. He’s always looking “for the good in people,” and he’s a character we want our children to emulate.

Of course, we know that the heart of man is wicked (Jer. 17:9). We also know that only the Gospel – and not kindness – can save the world. But I’m guessing that if more Christians exhibited Paddington’s kindness – a quality that Scripture commands (Eph. 4:32) – there would be more people in the pews.

The comedy. It’s not easy finding films with appropriate humor for children, but Paddington 2 has plenty of it. Who wouldn’t enjoy watching our beloved bear give someone a bad haircut – and then try and fix it with marmalade? Also, moviegoers shouldn’t miss the humor in the most unlikely of places – like the random newspaper headlines.

The finale includes an underwater scene that seemed over the top and unnecessary. But I’m nitpicking.