REVIEW: ‘Paul: Apostle of Christ’ one of the best Bible movies I’ve seen

The movie Paul: Apostle of Christ (PG-13) opens in theaters this weekend, giving us a powerful story that is sure to inspire moviegoers to live boldly for Christ. Our reviewer calls it one of the best Bible movies he’s seen. 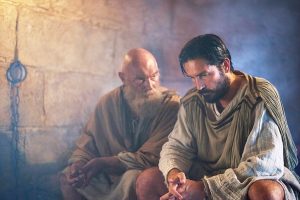 The year is A.D. 67, and Emperor Nero – the cruel Roman ruler you read about in history books – is on a rampage.

At night, his soldiers tie up Christians on street posts and set them ablaze. During the day, the soldiers round up the other Christians and take them to the arena, where they are eaten by lions to appease the blood-thirsty oligarchy.

If that weren’t bad enough, the Christians’ wisest leader – the Apostle Paul — sits in a dark and dirty prison awaiting execution.

“His work for Christ has come to an end,” says Luke, Paul’s young and courageous close friend.

Christianity’s future seems bleak, but Luke has a plan. He will visit and interview Paul to make a written record of the apostle’s incredible life. This document (Acts) then will be copied so that it can encourage the persecuted church and help spread Christ’s message to the ends of the earth.

Luke’s idea is a risky one – he faces death if it’s discovered he’s a Christian and not simply a concerned physician – but it just may be worth it.

The film follows two narratives: 1) Paul’s recapping of his life to Luke, and, 2) Priscilla, Aquila and the other Christians debating how to respond to Nero’s persecution. (Should they flee Rome? Stay in Rome? Take up arms and rescue Paul and the other believers?)

It is part biblical fact and part biblical fiction, although the film’s writers did a masterful job of weaving together a believable narrative that’s full of Scriptural references. For example, we know from Scripture that the churches in the New Testament took up collections to help one another, and they did in the movie, too, as Luke hands Aquilla a bag of coins from a sister congregation. We know from Scripture there were false teachers in the church, and in the film we hear that Titus and Timothy have “straightened” them out. We also know the New Testament church cared for widows and orphans, and in the movie we hear Priscilla assert that the Christians should remain in Rome solely to care for those vulnerable groups.

Faulkner, though, is the heart and soul of the movie, delivering a powerful performance that is sure to inspire moviegoers to live boldly for Christ.

Faulkner’s character quotes Scripture often, but it always sounds as if it’s being said for the first time in history – and not read dryly from the pages of the New Testament.

Paul: Apostle of Christ is one of the best Bible movies I’ve seen. Let’s examine the details.

Moderate. We see charred bodies on street posts. Later, we see a soldier douse a Christian with a liquid, then set him on fire. A soldier kicks Paul – who is lying on the ground — in the back. We see bloody scars on Paul’s back. We hear a mom reference how a soldier took and killed her baby. Paul discusses how he hunted down and killed Christians. We see drops of blood on the ground from Stephen’s martyrdom. A Roman official grabs a woman by the throat. A soldier gets stabbed. Luke performs a medical procedure and drains blood from a patient. We see Christians walking into the arena, but we don’t see them eaten or killed. We see a character preparing to be beheaded; we see the sword raise, but nothing else.

The Christian love between Luke and Paul is admirable.

Luke and Paul oppose violence against the Romans. “We cannot repay evil with evil,” Paul says. “Evil can only be overcome with good.” Says Luke, “Love is the only way.”

Priscilla and Aquilla have a disagreement over whether the Christians should flee Rome (The disagreement never reaches an argument.) The movie references Roman gods and sacrifices to gods.

Paul’s focus was on heavenly matters. When told that he faces certain death, he continues preaching the Gospel, knowing that such an action will only hasten his execution. Later, when he has a chance to escape the prison, he refuses to leave. He also expresses dismay over his “thorn” in the flesh and his sinful past, but then adds that Christ’s “grace is sufficient.”

As he says, his goal is to do “everything” for Christ. May that be our goal, as well.

The church father Tertullian (AD c. 155 to c. 240) famously said, “The blood of the martyrs is the seed of the church.” He was referencing a paradox: The Christian faith grew despite that fact that Christians were beaten, tortured and killed for their faith. In Paul: Apostle of Christ, we see this paradox on the big screen – and it is inspiring to watch.

Paul: Apostle of Christ is rated PG-13 for some violent content and disturbing images.