REVIEW: ‘Operation Finale’ is a nail-biting historical tale of justice

The historical drama ‘Operation Finale’ opened in theaters this week, recounting the true story of how a band of Israelis found Holocaust mastermind and Nazi Adolf Eichmann, who had been hiding out in Argentina for a decade.

Ricardo Klement is a common man in 1960 Argentina who wakes up early each morning, so he can take the bus to the automobile factory and support his family.

Or so everyone thinks. 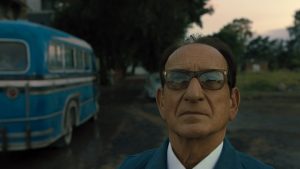 His real name is Adolf Eichmann – the Nazi German official who rose to lieutenant colonel and was considered the “mastermind” of the Holocaust that left an estimated 6 million Jews dead during World War II. After the war, he fled Europe to hide out in Argentina.

Few people in Argentina know his real identity, but that is about to change. Israeli government officials have learned his location and given a small group of covert operatives a monumental task: kidnap Eichmann – without killing him – and bring him back to Israel where he will stand trial for war crimes.

Before they leave, Israel’s prime minister pleads: “For the sake of our people, I beg you, do not fail.”

The historical drama Operation Finale (PG-13) opened in theaters this week, recounting the true story of how a band of Israelis plotted and then successfully captured Eichmann without requesting permission from the Argentina government, which had a history of not extraditing former Nazis.

It stars Oscar Isaac (The Force Awakens, The Last Jedi) as Israeli operative Peter Malkin, Ben Kingsley (Gandhi, Schindler’s List) as Eichmann, and Mélanie Laurent (Now You See Me) as Hanna Elian, the Israeli doctor in charge of sedating Eichmann.

Operation Finale is the best historical drama yet of 2018 and perhaps even better than 2017’s Darkest Hour and Dunkirk, two other World War II films. In Operation Finale, we experience not only a nail-biting escape but also the emotions of Malkin and the other Israelis, who lost family members in the Holocaust and are tempted to kill Eichmann before he is flown back to Israel.

Still, it’s not a kid-friendly movie.

Moderate. We see frequent flashbacks to World War II and the Holocaust. We see a dead woman hanging from a tree, with Nazi soldiers laughing. Later, we see a truckload of bodies, and soldiers shooting a group of Jews. We also hear Eichmann describing, in detail, the killing of a mother and her baby. We hear Israelis discussing the family members who were killed.

Minimal. A couple share a kiss. A man tries kissing a woman in a car, but she refuses.

Teenagers watch a theatrical movie that includes the n-word. The Israelis celebrate by drinking alcohol. We see someone sitting on a toilet.

Not surprisingly, Operation Finale is full of life lessons and positive messages. We see racism confronted, head-on, via words and deeds. We see what happens when the church fails to oppose evil, as in the case of priests in Operation Finale who hide and side with the Nazis. We see the famous verse in the Old Testament – “your sin will find you out” (Num. 32:23) – put on display as Eichmann is hunted and finally found.

Operation Finale also delivers lessons on truth vs. relativism (see below) and justice vs. revenge (see below).

Truth vs. relativism: The world knows Adolf Eichmann as the man responsible for the deaths of millions of Jews. That’s not how he sees it. “We tried to save Jewish lives,” he claims, saying no country would accept the Jews. As for his role in the Holocaust? He was just following orders. “I was merely a cog in a machine.” When Eichmann is confronted by the truth of the Holocaust and what happened in the war, he retorts, “What is truth? Whose truth?” Eichmann believes there are two sides to the story of the Holocaust – and that the Nazi side needs to be told.

The Christian faith, though, is built on absolute truth. Scripture even says that “lying lips are an abomination to the Lord” (Proverbs 12:22). God is a God of truth. Either millions of Jews were killed during World War II … or they were not. General Dwight D. Eisenhower, upon entering the concentration camps after the war, said he encountered one room where 20-30 naked bodies were piled. His companion, George Marshall, refused to enter out of fear he would get sick. But Eisenhower made himself enter “in order to be in position to give first-hand evidence of these things if ever, in the future, there develops a tendency to charge these allegations merely to propaganda.” For the Holocaust – and for everything else – there aren’t “two truths.”

Justice vs. revenge. Revenge is a powerful emotion. No doubt, we can empathize with the Israelis who wanted to kill Eichmann, on the spot. They complained that he didn’t deserve a trial. But the Israeli prime minister wanted something else. He wanted justice: “If you fail,” he told the group, “he escapes justice, possibly forever.” Yes, Eichmann would have faced justice when he stood before God, but God has ordained governments to administer earthly justice (Rom. 13). It is not for the individual to employ.

Operation Finale has few weaknesses, but the staking out of Eichmann’s home and the capture of him in the middle of the night is a highlight. Also, Kingsley is stellar as Eichmann.

Rated PG-13 for disturbing thematic content and related violent images, and for some language.