Categories Menu
Home » Culture » REVIEW: ‘Indivisible’ has a convicting message for those in...

REVIEW: ‘Indivisible’ has a convicting message for those in ministry

The faith-based movie “Indivisible” (PG-13) opens this weekend, telling the true story of a chaplain whose marriage was nearly torn apart due to emotions and pressures he didn’t expect.

Heather Turner is a stressed-out Army wife who wants her husband home.

For the past 15 months, she’s been juggling three children and day-to-day-life while her husband – Chaplain Darren Turner – serves in his first tour in Iraq. Separation has been tougher than they expected.

But when Darren returns to the U.S., life doesn’t go back to normal. The loving husband and father has been replaced by someone who is distant and angry. Instead of playing with the children, he sits alone in the backyard, contemplating the horrors of war. And instead of helping with the housework, he argues … a lot.

Finally, after one heated argument, Heather orders him to move out.

Darren and Heather each got into military life to help save souls and rescue marriages. Are they willing to go to battle to save their own relationship?

The faith-based movie Indivisible (PG-13) opens this weekend, telling the true story of a chaplain whose marriage was nearly torn apart due to emotions and pressures he didn’t expect. It stars Justin Bruening (Grey’s Anatomy) as Darren and Sarah Drew (Grey’s Anatomy, Mom’s Night Out) as Heather, and was directed by David G. Evans, who also helmed the faith-based movie The Grace Card. Provident Films, the same film company behind I Can Only Imagine and War Room, was involved with Indivisible.

It reportedly is the first film ever to spotlight a military chaplain, although its target audience is military and non-military families. That’s because it carries many of the universal themes and messages that were in the 2008 movie Fireproof.

The movie begins with Darren reporting for duty at Fort Stewart and learning that due to a shortage in personnel, he needs to travel overseas faster than he and Heather had planned.

Indivisible is an entertaining and inspiring movie that has a message that many families, including those in ministry, need to hear. Bruening and Drew are solid in their roles, too.

Minimal. We see several gore-free combat scenes. Death is discussed. Bodies are placed on stretchers. Darren carries a dead child. One of the most tense-scenes involves Heather and her attempt to prevent her asthmatic daughter from dying (The girl survives).

None. Darren and Heather kiss.

Darren’s commitment to the people in his unit is impressive. When one soldier tells Darren to mind his own business and to stop asking personal questions, Darren lays off momentarily but doesn’t give up. He also befriends a soldier who is doubting God. It’s obvious that Darren has a calling on his life from God. Heather, too, is involved in her own ministry outreach (to military spouses). 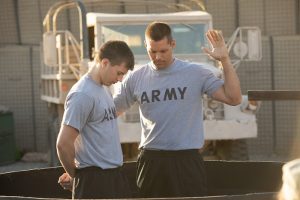 Darren and Heather have a couple of heated arguments.

Indivisible provides multiple life lessons, including ones on forgiveness and reconciliation, selflessness and balancing family life and ministry. Speaking of that …

The movie’s primary theme is reconciliation within a marriage. But related to that is a theme directed at those in the ministry: balancing family responsibilities with God’s call on your life.

Most pastors work well beyond 40 hours during the week, facing pressures not seen in some other professions. Just like in Indivisible, the family can be forgotten.

“There are elements of this film that I think many pastors will be able to identify with – the struggles they face every day,” Evans, the director, told me. “It’s the phone calls, the visits to homes and hospitals, and the counseling that they do. … We’ve all seen examples where pastors can have a huge fall from grace, and they’re being attacked by the enemy.”

The good news: God can salvage any broken relationship.

Acting is a weakness in some faith-based films. In Indivisible, it’s a strength.

The war scenes are passable, but they are not as strong (or gritty) as in most movies you’ll see.

Rated PG-13 for some thematic material and war violence.