It’s a special time for me. On Monday, Nov. 19 I will turn 50. In honor of this occasion, this week’s Doyle’s Half Dozen will be six memorable birthdays.

When I was putting this DHD list together, I thought both of these incidents happened the same year. However, I was a year off.

Being the sports nut that I am, I constantly recall historical athletic events. Both of these debacles happened on my birthday. In 2005, OU was playing at Texas Tech, and I remember being so bummed when the game ended that I did not want to do anything for my birthday. The OU Daily featured an article that listed this game among the “three worst calls” in OU football history.

In 2004, I remember watching highlights of what has been considered “the worst night in NBA history.” What resulted from the Indiana Pacers-Detroit Pistons game on Nov. 19 is now known as the “Malice in the Palace.”

Both of these disappointing and disastrous events happened on my birthday.

I don’t exactly remember what age I was, but sometime in the late ‘70s, my mom let me have a sleepover birthday party with some friends. She was great about it, but one thing she planned for us boys to do that night was go to the Continental Theater to see a showing of The Sound of Music.

I remember not being all that thrilled about it beforehand. However, if you ever went to the historical Continental Theater, which used to be located near the Founders Tower near May and Northwest Expressway, it was of the old design of having one screen in an enormous setting with the formal curtains that rolled back to show a huge screen.

That was my first time to see The Sound of Music. It’s shown almost twice a year now on primetime TV, so it doesn’t seem like a major deal now. At the time, having a bunch of friends over to spend the night was the prioritized interest in my young mind. But watching one of the greatest movies of all time in a historic theater has become a fond memory.

In 1987, I spent my first birthday away from family. It was the middle of my first semester attending Liberty University. Though I missed being with family, I had a close-knit group of friends who made that night significant.

It was a Thursday night, and my friends Brian Sharp and Jimmy Jackson asked me to go to the Deli on campus with them. It was a surprise party. I don’t remember how many were there, but it was a decent-sized group. Most of them I knew well, but some were not in my circle of acquaintances. The reason why is Brian and Jimmy were a part of throwing a combo-party for me and Scott Crosby.

At first I thought it was odd that I shared a party with someone else. However, as time went on, Scott and I became close friends, and we still keep in touch. He was a groomsman at my wedding, and I went to visit him a few years ago, as he currently lives in Roanoke, Va.

Last year’s birthday was memorable because of the cake I got at work. 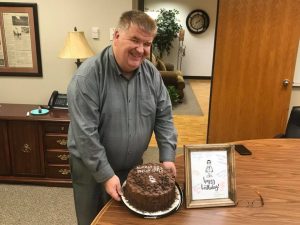 As you can see in the photo, I was asked to pose with my cake, but the humorous part happened just before. I picked up the cake and almost lost it to the floor. I thought it was more stable on that black platter, but it started to slip when I raised it. Though you can’t see, on the other side of the cake near my left hand is a large thumb print in the base of the icing.

My co-workers still laugh about what almost could have been a disaster.

My awesome wife goes all out when it comes to parties and celebrations. Karen did a lot of work planning a surprise party for me when I turned 40. I knew I was meeting my family at Johnnies on Britton near May, but what I didn’t know is much more than my family were crammed in to the back dining area. Management was getting nervous.

It seemed like Karen invited the whole universe. I could not believe how many people showed up. And I don’t think Karen expected all that many either. Another significant element to that party was about eight pregnant women were there in that uncomfortable setting of a packed room. I think one left soon after I arrived.

No doubt, that night was quite memorable, and I appreciate Karen going to all that hard work to make it happen.

I don’t know if this is arrogant of me, but I’m already expecting my 50th birthday to be memorable. Karen is already working on setting up for a party for me (I’m not expecting any surprises).

The reason why I believe it will be memorable is by reflecting of how I got to my 50th year of life. God has blessed me in abundance.

“This is my comfort in my affliction: Your promise has given me life.”