I found an image on Twitter this past week. It had two columns. On the left, “Culture says” with an image of an immodestly dressed young lady and the words “These shorts are in! Everybody’s wearing them and there’s nothing wrong with showing a little skin. Besides, it’s hot and I know I’m a Christian.”

On the right, “God says” with an image of a modestly dressed young lady and the words, “You are my masterpiece and I made you for your husband’s eyes only. Your clothes shouldn’t draw attention to you, but your attraction should come from the good you do in My name.”

I thought it had a great message to it. It compares and contrasts how culture influences and persuades people to dress versus how God would prefer His children to dress. You can say that culture doesn’t influence you, but think about why you wear what you do. Did you make it by hand without any influence from anything already made? Probably not. Then it was influenced by something — a trend, a celebrity, the “in” color. Not only that, but you probably like it and wear it because you know that you will be accepted into a certain group of people.

Is anyone else guilty of this besides me?

You may not see any problem with short shorts and mid-drifts, but if you read my last two posts, I would challenge you to think about the motives behind what you wear.

The world portrays modesty in the context of being shy, unconfident and lonely. And if we aren’t sharing the Truth about modesty, that’s the definition that will be taught to the upcoming generation about what to wear.

Had my mom not taken the time to endure our worst shopping trips, my tears and arguments about wanting to wear certain clothing trends, I would not understand the meaning of modesty, either. This series of posts explores fashionable options to modesty. Modesty that encourages women to be confident about who they are without the need to exploit their bodies. Modesty that allows women to show a gentleman her heart and mind before her legs or chest.

One ‘trend’ that drives me crazy is when ladies wear clothing that exposes their undergarments. Be it panties or bras, they go UNDER your clothes for a reason.

Cute prints can be fun when around your girlfriends, but be mindful of what you’re wearing on top of it. Hot Pink bra straps cannot be hidden under a thin, white top.

Fashion Tip: Even though bold patterns are fun, if you’re wearing thin or loose clothing, be sure you wear skin-colored undergarments. Other great accessories include a slip, a camisole or even a ‘bandeau’ — a shorter version of a cami when length isn’t necessary.

Slips can be hard to find these days, but Dillards has a good selection of half-slips. I prefer those with a cami instead of a full-slip. 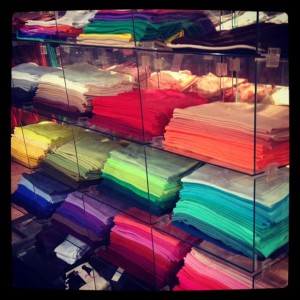 One of my favorite boutiques in Edmond is called “Eve’s and LuLu D’s” (P.S. they have EXCELLENT sales!). This picture is from their Facebook page and shows the extent of camis and bandos they offer. Camis can also add a pop of color to your outfit and can help tie in accessories.

Some of my favorite bandeaus (some times called tube bras) are lacy. This image is from Eve’s, but Target also sells an assortment of bandeaus – colored or lacy. 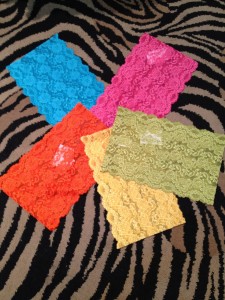 Often times she could tell when a shirt or dress was good in every way except being too see-through. She was gracious to offer an alternative of bandeaus, camis and slips to keep me modest but also allow me to wear trendy outfits.

My husband, Sean, is strongly against any see-through shirt, even with a cami beneath it. This is not because he hates fashion or trends, it is because he understands how clothing on a female can affect the way a male looks at her. In protecting my modesty, I am able to protect my personal integrity, respect and honor.

Many women might read this and think that I am saying ‘don’t dress in xyz so that you don’t make other people stumble,’ and while there could be some truth in that, I want to challenge young ladies to dress modestly for themselves. If you dress to impress other people for attention, that’s a heart problem. If you dress in a way that protects others but harms your own self-respect, that’s a heart problem.

God made you in His image. Be proud of that. Flaunt your heart, not your body.

“Your beauty should not consist of outward things like elaborate hairstyles and the wearing of gold ornaments or fine clothes. Instead, it should consist of what is inside the heart with the imperishable quality of a gentle and quiet spirit, which is very valuable in God’s eyes.” (1 Peter 3:3-4) (HCSB)